I was looking through my oldest daughter’s baby book last night and found that we had noted the price of gas at $0.70 per litre; I had noted at the time that this was “really high”! This got me thinking about inflation.

My daughter is 10 years old now, and gasoline has been hovering at between $1.00 and $1.10 in recent weeks here in Toronto. Some of the increase is due to volatile commodity prices, but a large portion of it is due to inflation.

We tend not to think about inflation these days; it is an unspoken part of our everyday lives. A friend of mine recently commented to me that inflation is a modern phenomenon and that in pre-modern societies people simply didn’t have to put up with it. I pointed out to him that a) he’s wrong, there have been four Great Waves since the 13th century, (to borrow from the title of David Hackett Fischer’s excellent book on the topic), and that b) in modern times there have been periods of significant deflation (most recently during the Great Depression). Here is a graph showing the annual rate of change in the Consumer Price Index in Canada since 1919: 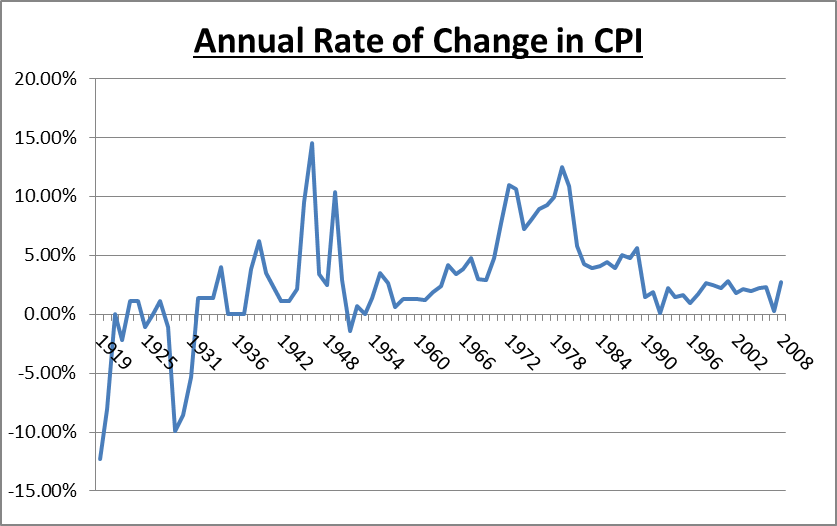 Anyway, as I said, we tend not to think much about inflation. Often, this is a good thing; many people feel good when they receive a 2% raise, and do not like to be reminded that they are just treading water. Deflation, meanwhile, can be crippling for debtors; over 100 years ago, the Democratic presidential candidate, William Jennings Bryan*, famously said that American farmers were being crucified on a “cross of gold” due to a refusal of the government to depreciate its currency.

*It still blows my mind that the Democrats gave Bryan three consecutive kicks at the can as their presidential candidate. Not until Mike Milbury took over the New York Islanders would an organization show such patience with an unsuccessful leader.

Inflation is something that we are comfortable with, so long as it is predictable. It is over 20 years since the Bank of Canada committed itself to fighting inflation, and we tend to assume that things will simply chug along. Yet inflation can cause tremendous distortions in the economy. It can lead to large losses on seemingly safe investments, such as government bonds, as anyone who purchased such bonds in the 1970s will know (or may not know). Payments on bonds are in nominal dollars; when the anticipated real (i.e. inflation-adjusted) value of a dollar declines, bond prices drop as well. If the annual yield on the bond you buy is less than the average rate of inflation over the term of the bond, you will lose money. Here is a look at the average real rate of return for holders of long term Government of Canada Bonds: 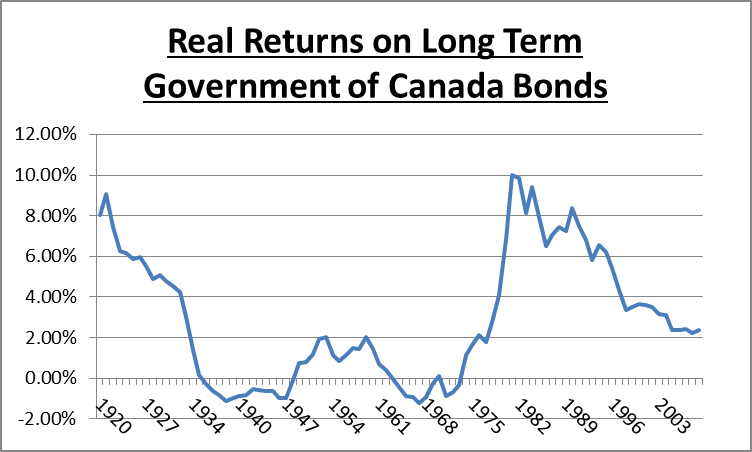 You can see that depending on where in the inflationary wave you purchased your bond, you could either make a lot of money, or none at all. (In general, bond yields tended to price in the recent history of inflation; they were lousy at predicting inflation. So, for example, if you bought a bond in 1982 – on the heels of the “stagflation” experienced in the late 1970s – the anticipated inflation built into your bond yield allowed you to make a killing).

Inflation and the Law

So much for the brief economics lesson. How is this relevant to lawyers?

Some areas of law consider inflation. One example is the Income Tax Act. One of the reasons that only 50% of capital gains are included in taxable income (for now) is because for assets that are held over a long period of time, there will have been an inflationary increase in the nominal asset value, which does not really represent incremental income to the asset owner. Tax brackets are also changed every year for this reason. Prejudgment interest is designed to compensate plaintiffs for inflation between the time of injury and trial.

One area of law that does not take inflation into account is family law (at least in Ontario). Consider the following case:

I presented this scenario to a leading family law practitioner and asked whether it made any sense that an equalization payment would need to be made. He replied that under Ontario’s Family Law Act, any increase in the nominal value of family property, even if due to inflation only, is considered to be an increase and to be part of “net family property”. Section 4 of the Act defines “net family property as:

the value of all the property, except property described in subsection (2), that a spouse owns on the valuation date, after deducting,

(a) the spouse’s debts and other liabilities, and

This issue arises in business valuations as well. As a result of inflation, a business will increase its selling prices (hopefully), its costs will increase, the replacement costs of its assets will increase, and a business that undergoes no fundamental change can find itself worth much more in nominal terms than it was at the date of marriage.

I suppose one could suggest a reading of the Act to the effect that the calculation should be based on real (and not nominal) values; but in my experience in dealing with family law matters, this is typically not argued.

One might ask, is this fair? There has been no real increase in the value of the property, why should the husband get anything? This was my first instinct In thinking about the issue. But I think now that perhaps that question – “is it fair?” – is not the right one to be asking.

Life is not fair. In some marriages, both spouses contribute equally (either to the business or to home life). This is not always the case, however. Rather than trying to assign points, the Family Law Act says simply: we will split the net increase down the middle.  It may not be “fair”, but it is impossible to legislate fairness with anything more than very broad strokes.

Statutory financial remedies will never be perfect. They cannot address all possible cases. The advantage of such relatively cut-and-dried remedies is that they provide a relatively simple system of efficiently adjudicating disputes and allocating money between the parties.

Of course, it does not always work out that way.