Discovery is under-way. The records are starting to flow. As you leaf through a box of documents just delivered, you pull out a stack of financial statements and, like so many other attorneys, you cringe. As you scan through the financial statements, you find yourself mentally reviewing the facts of the case and what useful data might be hidden within the numbers. Are there underlying financial issues that may require the assistance of an accounting expert?   Is the possibility of financial fraud an element of the case that needs to be considered?  In today’s world, keeping costs under control while achieving the best possible outcome for the client is crucial.  As an attorney, having quick tools at your disposable to perform a cursory evaluation of the financial statements may help determine if it is time to engage the services of a forensic accounting expert.

Over the last decade, our daily news has been filled with stories of million-dollar corporate frauds and staggering Ponzi schemes.   The question is: how prevalent is occupational fraud?

(1) they are under either financial or social pressure;
(2) have the opportunity to gain funds or perpetrate the fraud without being detected; and
(3) can rationalize their actions.

During periods of significant economic downturns and recessions, many companies find themselves struggling to stay in business. The recent banking crisis and the absence of funding added to the pressures these companies faced.This type of economic environment is ripe for fraud. Management may feel significant pressure to report positive financial results, contributing to their ability to rationalize questionable, if not fraudulent, accounting practices.

The Association of Certified Fraud Examiners (ACFE) categorizes occupational fraud into three main categories. The first category, asset misappropriations, involves schemes where the perpetrator steals or misuses the resources of an organization.   The second category is corruption, which includes schemes such as bribery, extortion, and conflicts of interest.  The final category of occupational fraud is financial statement fraud. These schemes involve the intentional misstatement or omission of material information in the organization’s financial reports. Financial statement fraud can be accomplished by recording fictitious revenues, concealing expenses or liabilities, and inappropriately inflating the value of assets. The following table, published by the ACFE in the 2010 Report to the Nations on Occupational Fraud and Abuse2, compares the frequency of the three categories of occupational frauds.

Occupational Frauds by Category (U.S. only) — Frequency A 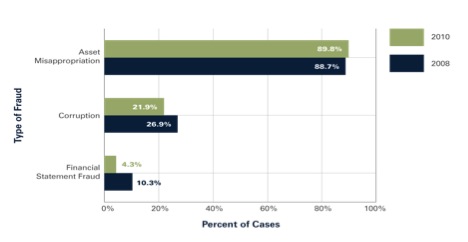 The sum of percentages in this chart exceeds 100% because several cases involved schemes from more than one category.

Asset misappropriation was by far the most frequently occurring occupational fraud in both the 2008 and 2010 study. Yet, the median dollar value of financial statement fraud is nearly ten times greater than that of asset misappropriation as the following table, also from 2010 Report to the Nations on Occupational Fraud and Abuse2, depicts.

The reasons to commit financial statement fraud are as unique as the individuals who perpetrate the frauds. Motivations run the gamut from desperation to plain, ordinary greed. The methods used to commit fraud are as equally varied. Common forms of financial statement fraud include overstating reported revenues and/or understating expenses. But how are these schemes accomplished and what questions might you ask when something looks out of the ordinary?

This is a common form of financial statement fraud. Companies may manipulate the timing of when revenue is recorded, moving future revenue into the current reporting period. Treating merchandise out on consignment as an actual sale or recording fictitious sales are other methods used to overstate revenue. As you look at the financial statements and note a sharp increase in revenue you might ask some of the following questions. If revenue is increasing substantially why is the company still suffering from a lack of available cash? Has the accounts receivable grown inconsistently with the growth in sales? Is there a significant change in the ageing of accounts receivable? Has the company’s current year revenue increased significantly when compared to historical periods while the industry as a whole reported conditions of stagnant or declining revenue?

This is another common form of financial statement fraud. By understating expenses a company can show increased profitability. Like revenues, companies may manipulate the recording of expenses by delaying the reporting of an expense, which should be reported in the current period, into a future reporting period. Another method may be to classify expenses that should be included as cost of goods sold as operating expenses. While this does not inflate the net income of the business, it does improve the gross margin which could be a key indicator for that particular business or industry. Or the company may simply not record an expense that was incurred on its books at all. In cases involving the understatement of expenses, the following questions may be warranted: Why did a particular recurring expense decrease significantly from historical periods? Why did the gross margin improve when compared to prior years? What specific changes in the operations led to the improved gross margin?

Other schemes might involve improperly disclosing the nature of related-party transactions, maintaining more than one set of books, capitalizing normal repairs and maintenance costs, or under reporting the liabilities of the business.  But it is important to keep in mind that the presence of red flags, such as those identified, does not mean there is fraud. A red flag is a signal that something is unusual or out of the ordinary. A red flag requires further investigation, analysis, and inquiry to determine whether there is a reasonable explanation, an error or something more.

So as you sit at your desk leafing through the financial records, what specifically should you be looking for?

Now it’s time to pull out your calculator. 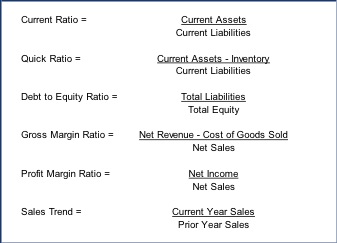 
Measures a company’s ability to meet its current liabilities using its short-term or liquid assets.  The higher the current ratio, the more likely it is that the company can meet its current obligations.

The Quick Ratio is similar to the Current Ratio except inventories are excluded from current assets.  Inventory is excluded to consider that not all companies can quickly convert their inventory to cash.  The Quick Ratio compares assets that can easily be turned into cash to liabilities that will come due over the next 12 months.

This ratio measures the increase or decrease in sales from one year to the next.  A declining sales trend suggests problems.  Whether the decline is the result of the loss of a key customer, increased competition in the market or some other economic condition, it calls into question the strength and health of a company.

The ACFE, in the 2010 Report to the Nations on Occupational Fraud and Abuse2, looked at both the frequency of fraud and the median losses due to fraud by industry.  The following table summarizes the ACFE’s findings: 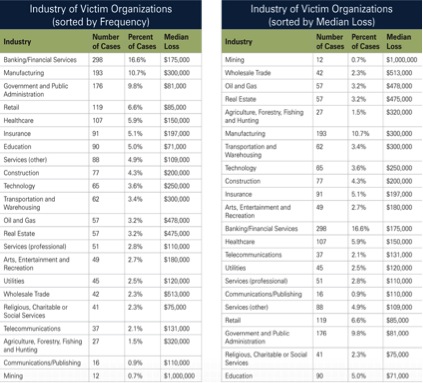 Note: There was a small sample of only 12 cases in the mining industry, which may impact the reliability of the median loss data.

As you look through financial statements of a particular company, understanding the industry and the overall economic condition of that industry will aid you in your analysis.

Alright, you can put the calculator away.

An entity may have gain or loss contingencies that are not disclosed within the body of the financial statements.  Litigation, possible tax assessments, renegotiations of material contracts, and employment contracts are all items that may be disclosed.

The liabilities section of the balance sheet provides an aggregate total of liabilities.  However, the notes to the financial statements provide additional information on the source of the financing, the future period costs and timing of the cash necessary for the repayment of debt.

When there is substantial doubt about the entity’s ability to continue as a going concern for a reasonable period of time, at least one year beyond the audit opinion date, a disclosure is made.  Management’s plans to address the issues facing the company are also typically included in the disclosure.  In 2008, Deloitte issued an audit opinion on General Motors that raised the issue of going concern.

In general, the notes or disclosures included with the financial statements provide additional background on the company, the accounting methods and practices and other details that support the body of the financial statements.  If the case involves a publicly traded company, you may also want to consider obtaining Forms 10-K and 10-Q, which are filed the U.S. Securities and Exchange Commission (SEC) and are available to the public at no cost through the EDGAR database on the SEC’s website.  Forms 10-K (annual) and 10-Q (quarterly) provide comprehensive information about a company’s history, organizational structure, subsidiaries and financial performance.