The main types of jet fuels used by airlines are Jet A-1, Jet A and Jet B. Jet A is mainly used in the United States, whereas Jet A-1 is commonly used outside the United States and Jet B is the least used, typically used in colder climates due to it being more flammable compared to the others.

Jet fuel is produced by blending kerosene (or kerosine) with other hydrocarbons and additives. Kerosene is mostly produced by the straight-run fractional distillation of crude oil heated to between 150 and 275°C. The yield of kerosene from a barrel of crude varies by the type of crude but averages around 10% in the USA.

The COVID-19 pandemic resulted in huge disruption to airlines, with both domestic and international air travel severely impacted for long periods of 2020 and 2021 due to government-imposed travel restrictions. Although there has been an increase in travel in 2021, the demand for jet fuel is nowhere near pre-pandemic levels and a full recovery is expected to take several years. 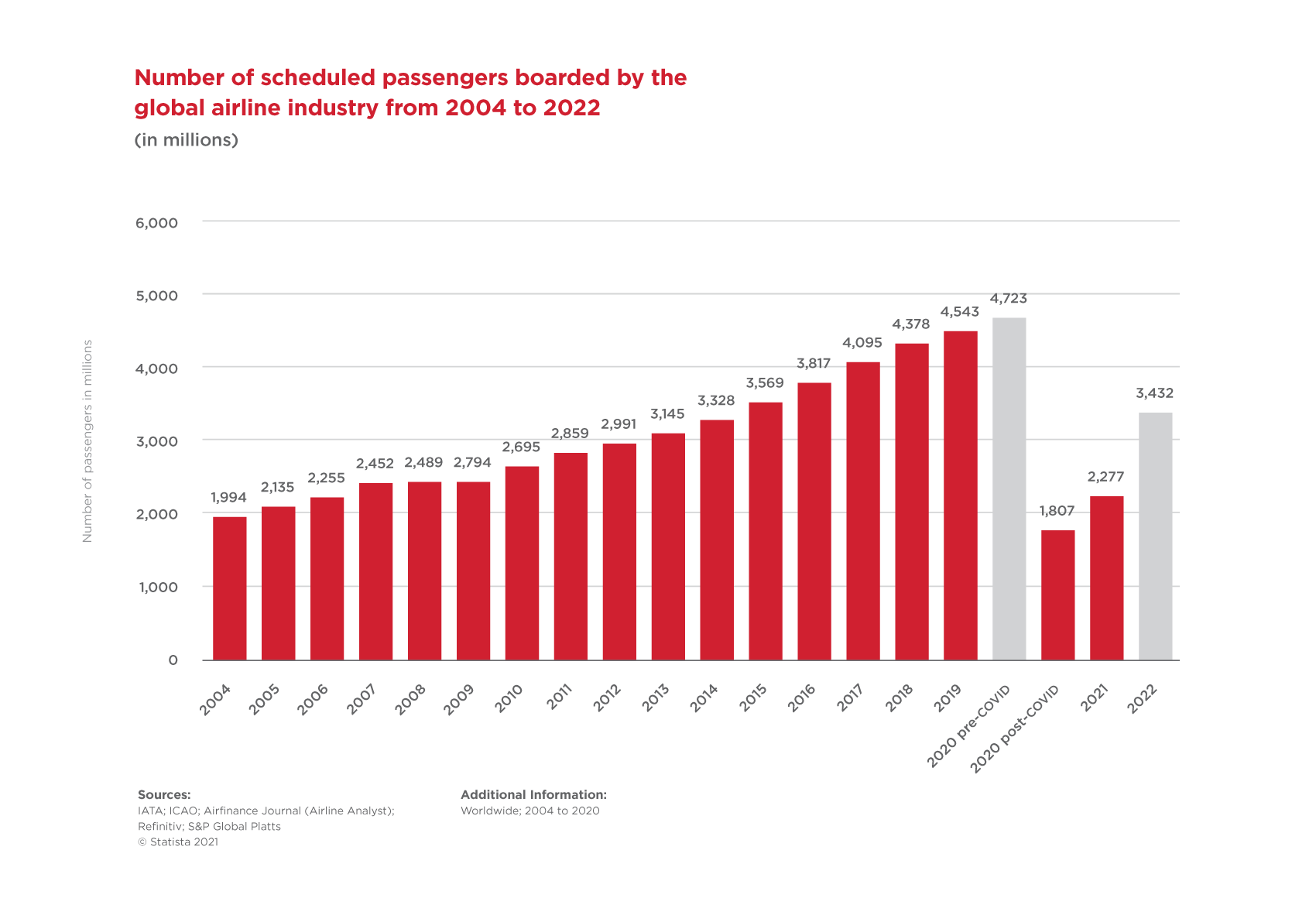 A barrel of crude is still a barrel of crude, with all of its constituent parts, so what happened to the Kerosene / Jet Fuel that was no longer required by the airline industry?

Well, the pandemic hit many parts of the economy that depend on petroleum products, not just air travel, so there was a global reduction in oil demand. 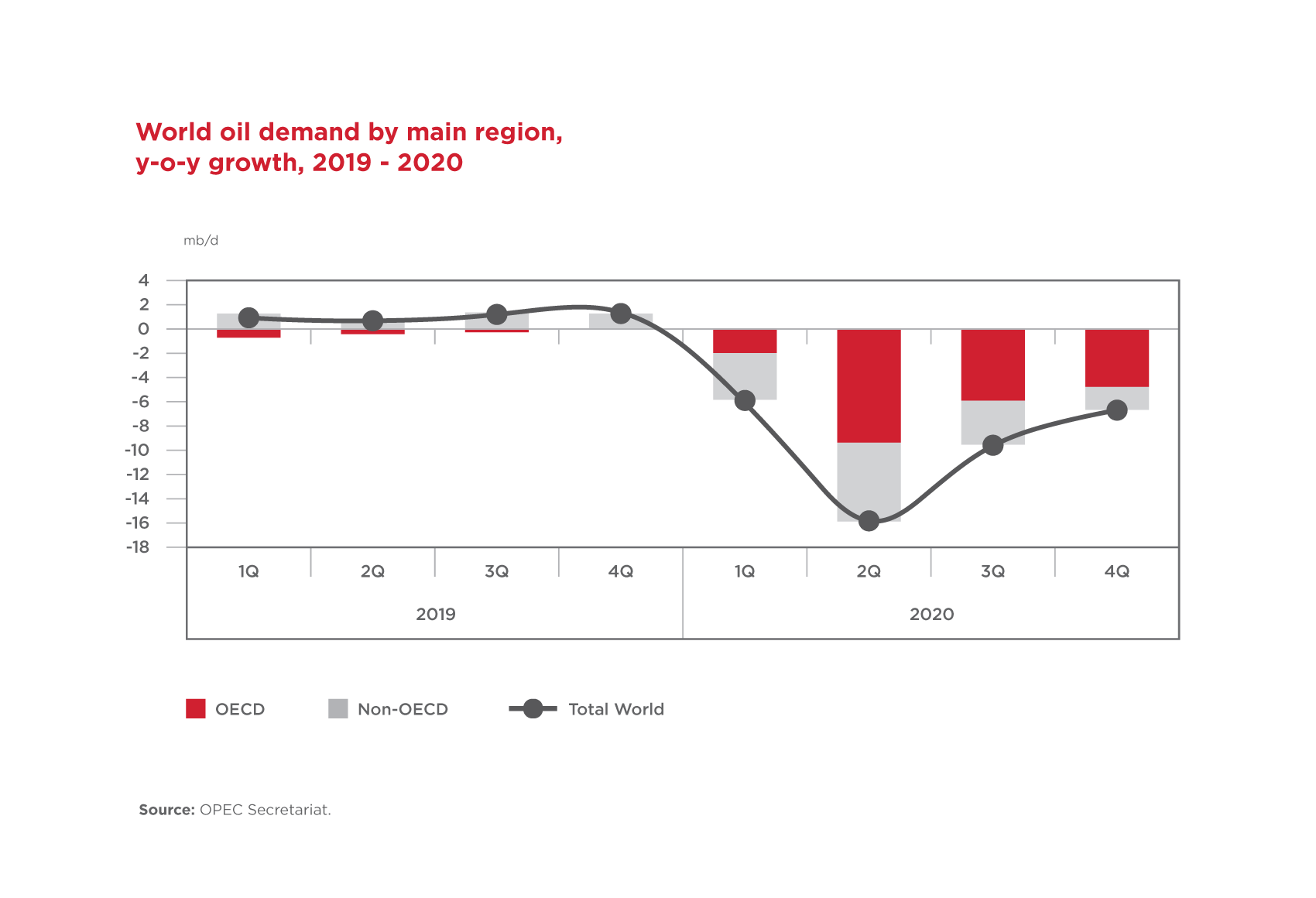 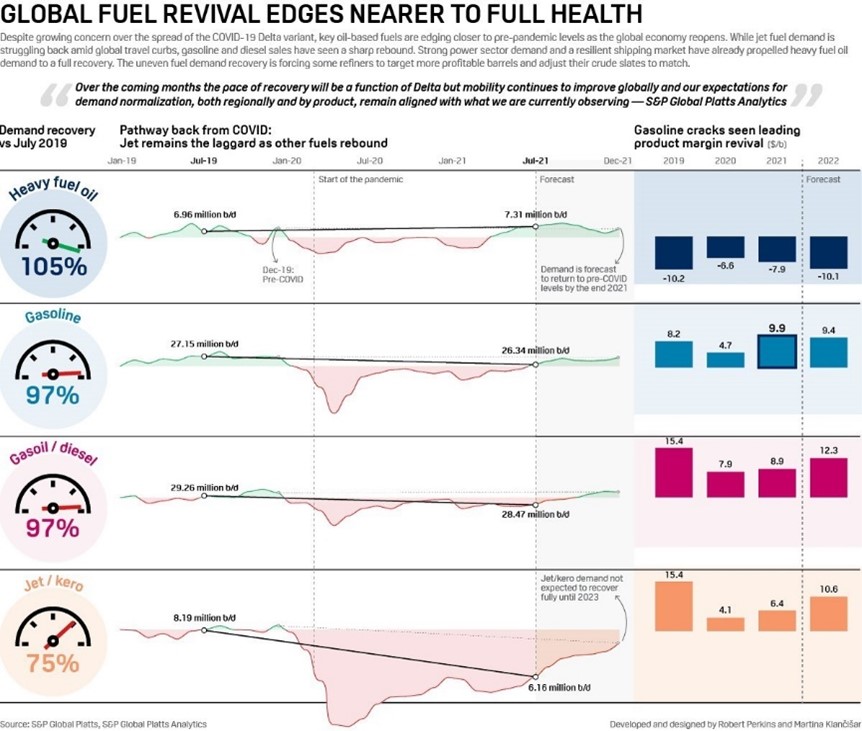 One of the solutions was increasing storage of jet fuel. 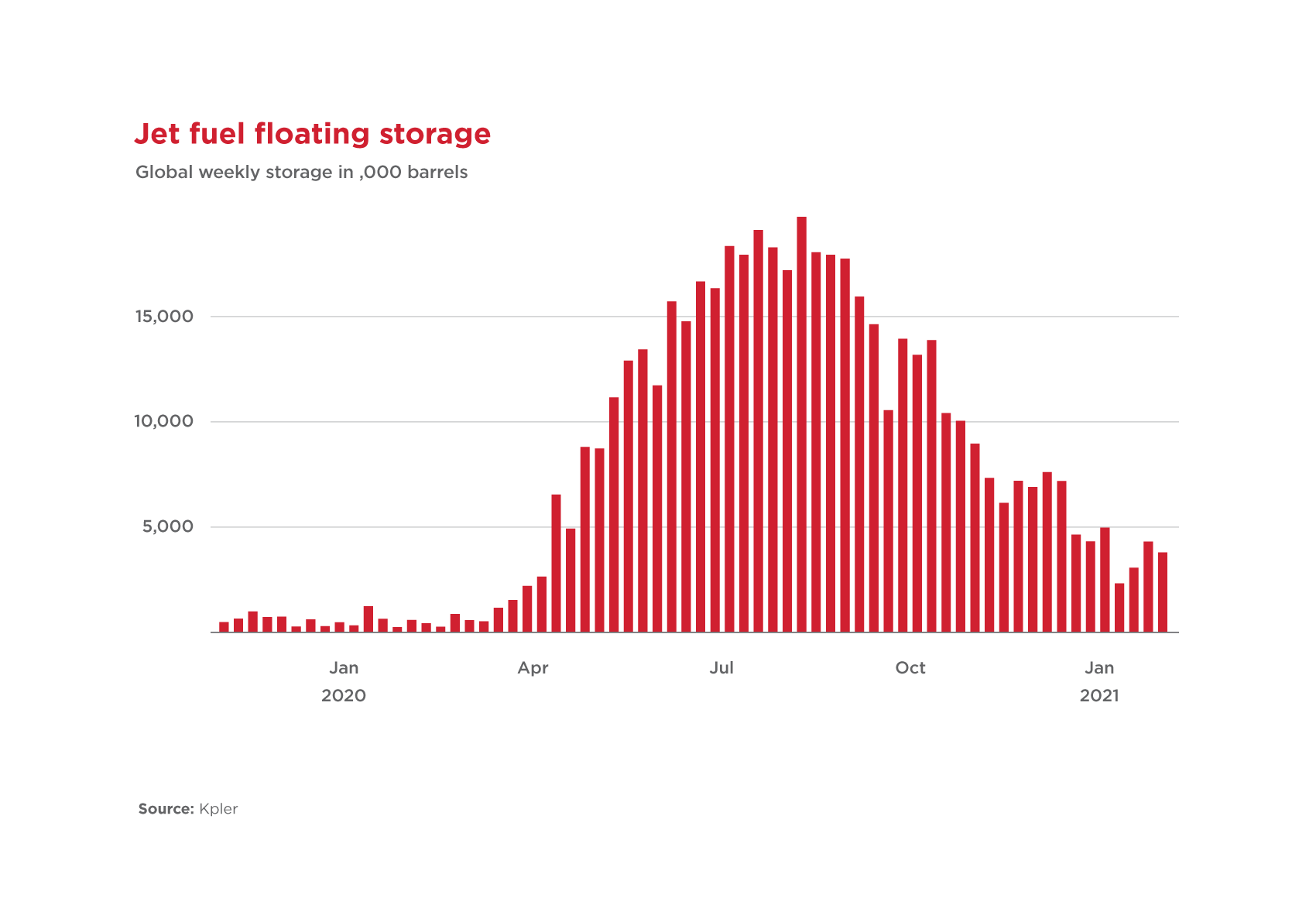 However, whilst the increase appears notable, it only represents a week or two of the reduction in jet fuel demand at its peak. This is unsurprising as storage is costly (the space itself and the cost of capital of holding expensive product) and carries significant exposure to market price movements.

The reality is that most of the kerosene ended up being repurposed and blended into other petroleum product streams, most notably the distillate (or diesel) pool, as shown in the charts below. 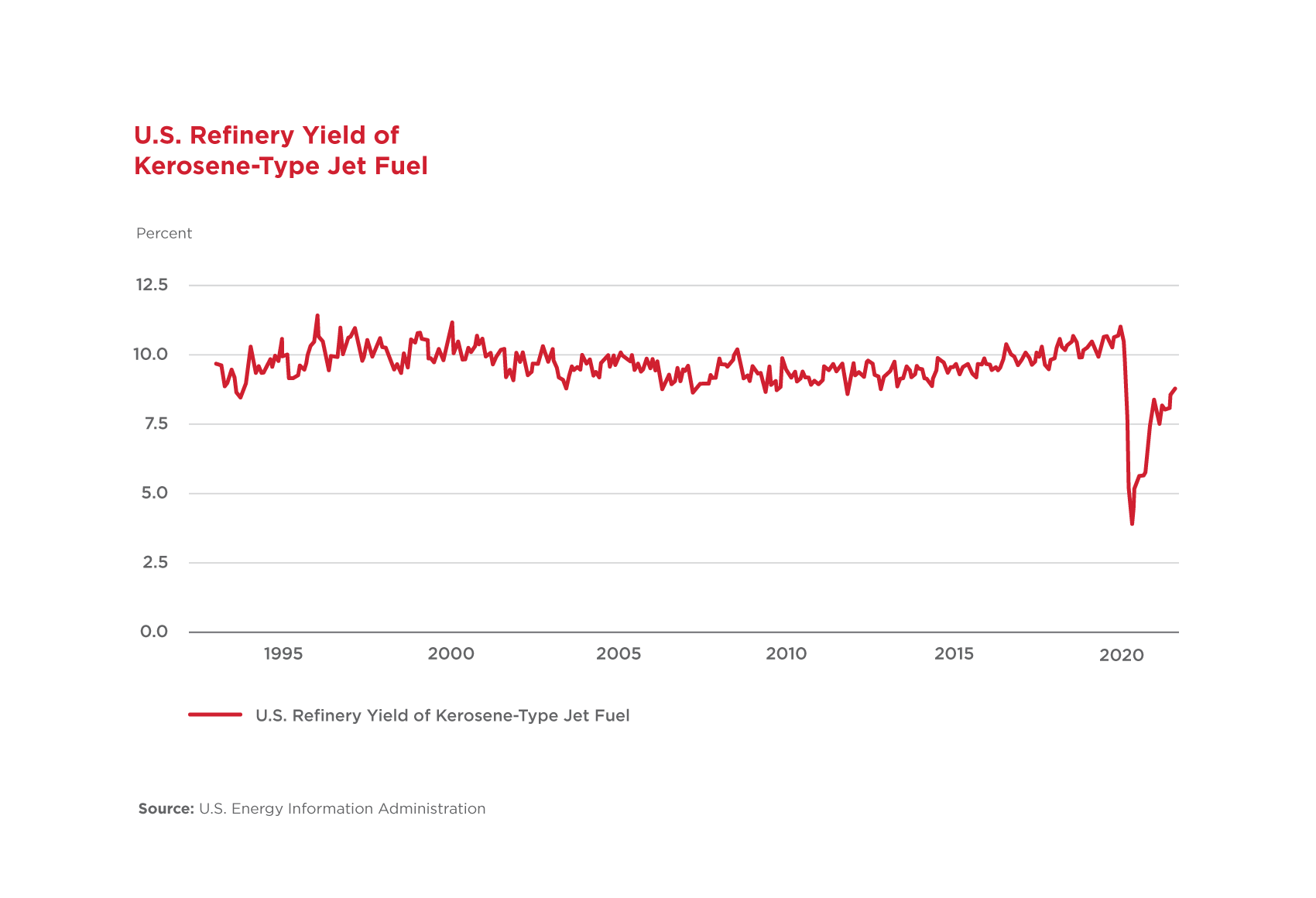 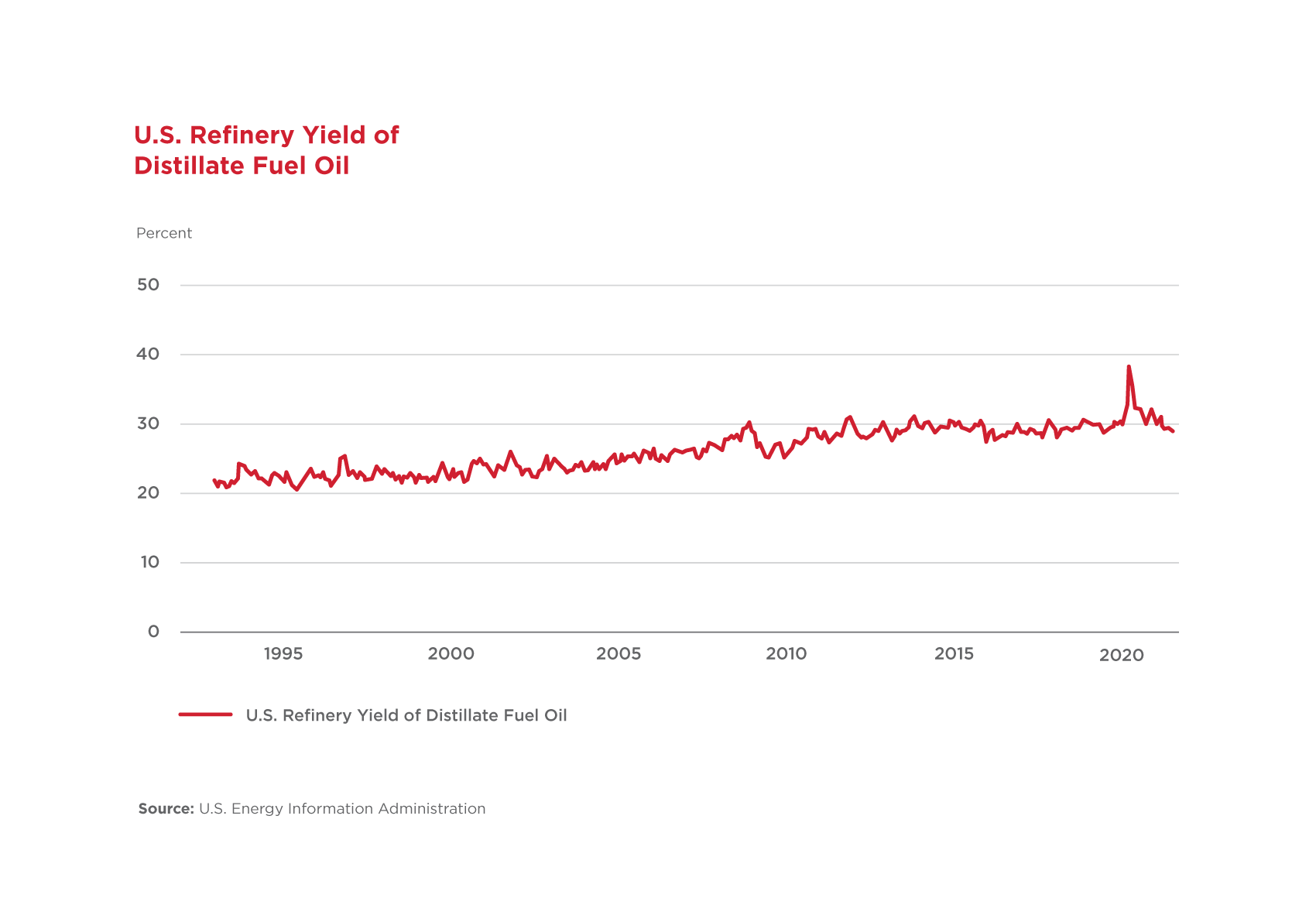 Another interesting twist is the impact on derivatives hedging undertaken by the major airlines. Prior to the pandemic, many airlines had hedged their price risks for a high percentage of their expected fuel demand. The extreme drop in demand in March/April 2020, and the drop in crude prices that ensued, meant that highly hedged airlines sustained significant hedging losses totaling billions of dollars in some cases. Having been stung by these hedging losses, on top of their operational financial woes, many airlines amended their policy of hedging to a much lower percentage of expected demand. 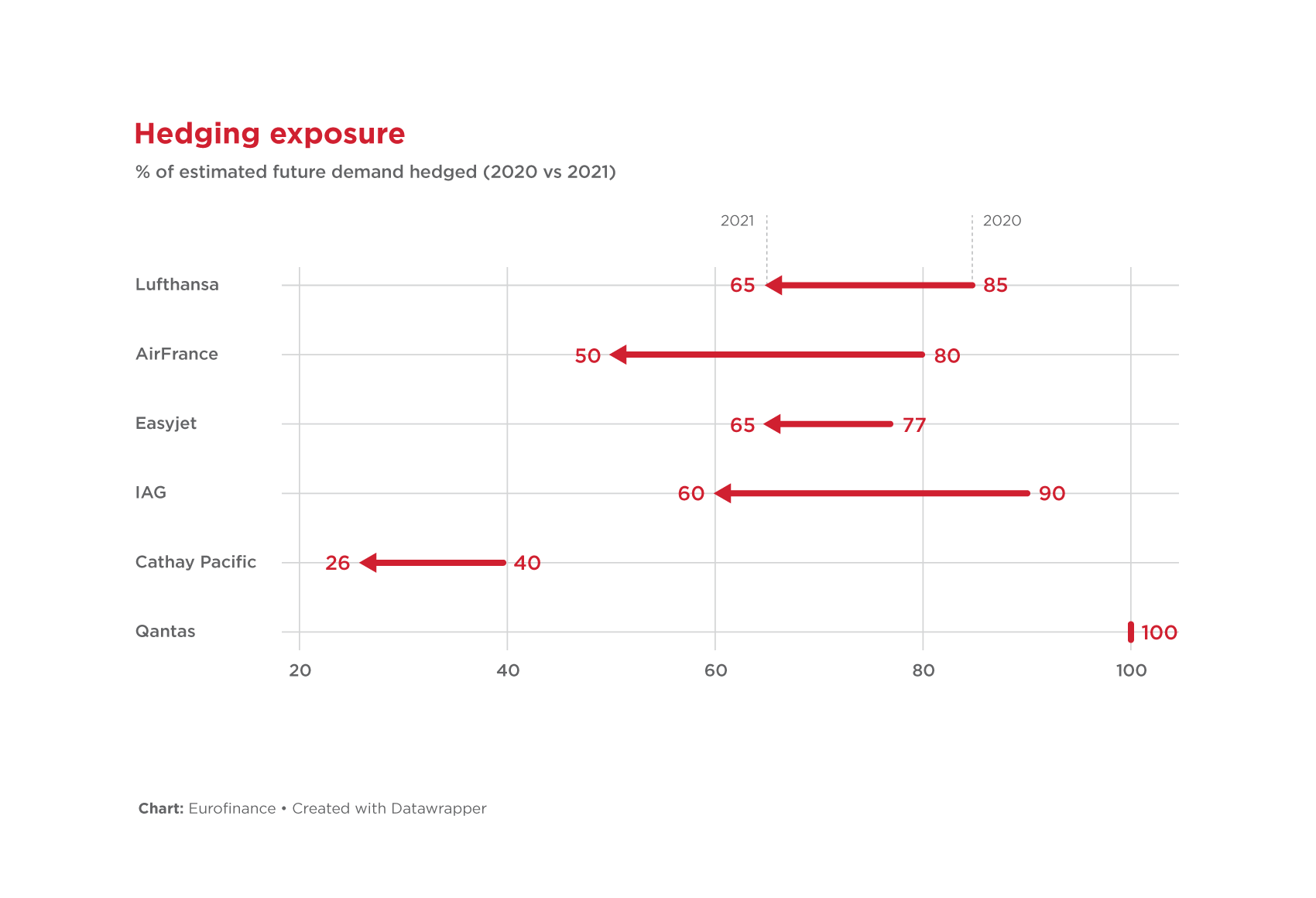 However, oil prices have now increased above pre-pandemic levels and future demand for air travel is highly uncertain so many find themselves not knowing how much they might be exposed to volatile price movements in crude oil in the future.

Volatility in terms of the product slate and the resulting refining margins outlined above means that careful consideration is required when assessing business interruption claims at a refinery in order to arrive at a proper indemnity.

By Sabu Yohannan and Phillip Taylor.