Backing out of a Franchise Just Got Easier

Section 6(6) of the Arthur Wishart Act gives franchisees the right to rescind their franchise agreements in the event that they do not receive a disclosure document. Ostensibly, the rescission remedy is designed to return the franchisee to the position it was in immediately prior to entering into the franchise agreement. Based on a recent ruling by the Ontario Superior Court,however, franchisees may in fact find themselves in a significantly better financial position following rescission.

In the event of a successful rescission, the Act requires that the franchisor:

In 2189205 Ontario Inc. et al. v. Springdale Pizza Depot Ltd. et al.(2013 ONSC 1232), the plaintiffs submitted a rescission claim under section 6(6) for approximately $354,000, including $113,000 in operating losses under subsection (d). Master Muir ruled that, based on the evidence, the plaintiffs had in fact operated their franchise at a small profit. The defendants argued that this profit should be offset against the amounts calculated under clauses (a) through (c). Master Muir rejected this argument. The defendants brought a motion seeking to oppose confirmation of Master Muir’s ruling, but Justice Lederman upheld the decision, ruling that “a rescinding franchisee is entitled to recover all amounts under ss. (a) – (c) … even if it has otherwise made a profit during the period of operation”.

This ruling is of significance for two reasons. Most obviously, it means that franchisees are able to rescind their agreements without having to pay to the franchisor any profits that they have made from the operation of their businesses; franchisees can thus be placed in a better financial position than they had been in prior to purchasing the franchise. Second, it means that how the franchise agreement is structured can matter a great deal.

Both franchisees suffer operating losses of $100,000 as shown below in Table 1: 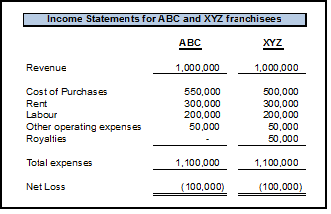 Each rescinds its agreement under section 6(6). For the sake of simplicity, assume that both franchisees manage to sell off all remaining inventory, supplies and equipment at their original cost.

Table 2 shows the rescission remedy for each franchisee. ABC’s calculation is straightforward. It has not paid any amount to the franchisor, other than for inventory, and its rent is paid directly to its landlord – it has no claim under (a), (b) or (c). It simply recoversits $100,000 operating loss under (d), and is thus restored to its original financial position. 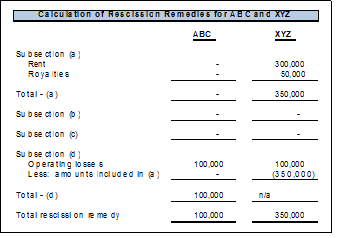 This example demonstrates that the Springdale decision may lead to anomalous financial rewards, and suggests that solicitors drafting franchise agreements would be wise to consider the potential categorization of payments required from the franchisee in the event rescission damages are ultimately claimed.

By Ephraim Stulberg. Published in The Lawyers Weekly, May 10, 2013