I hope this will be the final installment in this series, but one never knows. 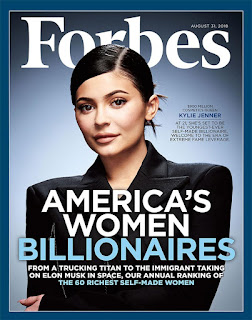 Back in the summer of 2018, I wrote a short piece questioning a sensational Forbes magazine article claiming that Kylie Jenner was worth $1B, based mainly on the results of her cosmetics company. The article accepted some of the figures used by Forbes, but made adjustments for two issues that were clearly wrong, namely operating profit margins and the overall forecast period.

This past November, when it was announced that Kylie was selling 51% of her firm to Coty Inc., I revisited the valuation in light of some of the public disclosures made following the announcement, and noted that some of the figures used by Forbes were now demonstrably inaccurate:

“These numbers are far different from those presented in the Forbes piece, so different in fact that the company described by Forbes bears little resemblance to the company that Coty has actually purchased.”

Well, Forbes has apparently been investigating just what went wrong with their reporting, and according this recent piece the answer is simple: they were duped, plain and simple – about historical revenues, growth rates, even about how much of the business Kylie actually owned. The corporate tax returns they shown were about as real as “reality TV”.

What to Make of All This?

I enjoy reading Forbes; I find the pieces entertaining and usually informative, and their reporters are very skilled at digging up information.

But if you are placing much weight on the figures that Forbes provides for private businesses (whether it is for individuals’ net worth or income or sports team valuations), the Kylie story should be a salutary reminder of the difference between a proper valuation report and a magazine article.

A proper valuation is based on a projection of the future cash flows of a business. While this projection is often informed by historic results, there are many assumptions that go into how one models the profits going forward that can have dramatic effects on the final number. These can include:

A proper valuation report will set out these assumptions; more detailed ones will go to a fair bit of effort to support these assumptions in light of historical company data, industry level data and broad economic data.

I’m not saying Forbes doesn’t do these things; maybe they do. But they certainly don’t disclose their detailed assumptions, and this makes it very difficult to put much stock in their valuations.

So the next time someone tells you that a private business is worth $x, ask them some of the above questions and see what they say.