In Canada, as a general rule, damages awards are subject to the same tax treatment as the monetary amounts they are meant to replace. For example, awards for lost profits are taxed as business income [1]. Litigation can often take a long time to resolve; some lawsuits span decades. What happens when the tax system undergoes significant changes between the year the lost profits would have been earned and the year in which the damages award is paid? 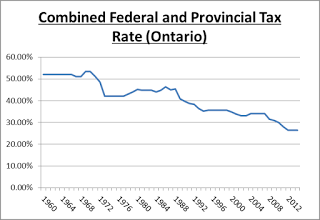 Consider the case of Eli Lilly and Company v. Apotex Inc.,2014 FC 1254. Apotex was found to have infringed Eli Lilly’s patents for the drug cefaclor; after many years, in late 2014 the court awarded Eli Lilly approximately $31M in damages resulting from the infringement over the period 1997 to 2000.

There is no discussion of income taxes in the written decision, and it is not clear if the issue was raised at trial. I refer to this case simply to illustrate the concept, and impact, of differential tax rates.

Had Eli Lilly and its Canadian subsidiary not been deprived of their lost profits in the period 1997 to 2000, they would have paid an average income tax rate of roughly 35% for sales made in Ontario; rates were similar in most other provinces. By comparison, on receiving its damages award in 2014 or 2015, Lilly will pay taxes at a rate of around 26.5%, a differential of 8.5%.

I underline the word “corporate”, because in many instances of business disputes involving small companies, the shareholder(s) of the plaintiff corporation are also named as parties to the suit. While there are no doubt different legal considerations that go into the decision to name individual plaintiffs, as a general rule when a dividend is declared to the individual shareholder, the combinedtaxes payable at both the corporate and personal level will be very close to the taxes that would have been payable had the income been earned by an unincorporated entity. In such situations, changes in the small business rate over time will (arguably) be largely irrelevant.