Towards the end of the Great War (or World War I as it came to be called), the American president, Woodrow Wilson, proclaimed Fourteen Points outlining his goals for the reconstitution of Europe, and the international state system as a whole, following the war. The French prime minister at the time, Georges Clemenceau, is purported to have remarked of the self-important American that even “Le bon Dieu n’en avait que dix!”.* For whatever reason, Top 14 lists have never really caught on; Top 10 lists remain en vogue. So, over the next little while, I will be posting on the Top 10 most common errors in damages calculations.

*Clemenceau failed to note, of course, that the Ten Commandments themselves actually contain more than ten commandments**. (Sorry, I am an accountant).

**Now, in fairness, the Hebrew Bible actually does not use the term “Ten Commandments” at all.

By far the most common error I encounter, especially from claims prepared by non-experts but also in occasional decisions of trial judges [1], is the failure to deduct saved expenses. People are generally well aware of their loss of revenue; they are generally less conscious of the fact that the event that caused them to lose revenue has also caused them to save certain expenses. The fact is, almost all situations involving a loss of revenue will also involve a savings in expenses.

All lost profit analyses can be expressed in the following equation. It is so fundamental that I have shown it in a red box:

Now, not everyone thinks in terms of red boxes; I, for one, prefer examples. So consider a simple example of a retail store that is forced to close by flooding originating from a neighbouring property. The store’s annual financial statements for the year preceding the flood are as follows: 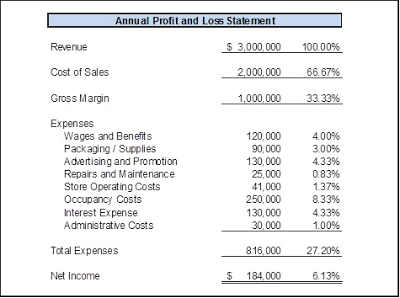 The closure results in a loss of revenue. But it will save some expenses.

The store will certainly experience a savings in variable costs. Variable costs are costs that – you guessed it – vary in proportion to the level of business activity. For example, to make a sale, the store must give the purchaser the item he or she purchased; it incurs a “cost of sales”. This cost, in our example, has historically been equal to 2/3rds (or 66.66%) of revenue.

The store will also likely experience a savings in its fixed costs. Fixed costs are those that do not vary directly with small fluctuations in business activity, but which are affected by large changes in the business, such as a prolonged shutdown. In the case of our store, if the store is closed long enough the lease may contain a clause relieving the business from paying rent while it is closed; the store may lay off its staff. If the business closes permanently, the annual loss of profit may simply be the difference between the normal revenue and the normal expenses, which in the example of our store is $184,000.

This is, of course, a very schematized example. Calculating saved expenses can be very challenging in practice, in particular when the projected revenue levels contemplate significant growth (or contraction). I will discuss this issue more in future posts, but for now I leave you with this basic lesson:

Lesson: When a business experiences a loss of revenue, it will almost always also experience a savings in expenses. This savings must be offset against the revenue loss to arrive at a proper assessment of lost profits.