International trade is an increasingly important part of the Canadian economy, as this picture clearly shows: 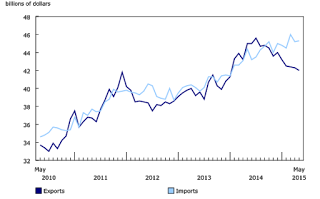 As a result, it is not uncommon for litigation to involve the quantification of financial remedies across multiple political and monetary boundaries. How does one take foreign exchange rates – and more specifically, fluctuations in foreign exchange rates between the date of initial wrongdoing and the trial date – into account? In the next two posts, I will consider the following five examples, through which I hope to illustrate some basic concepts:

You may be asking at this point, why not simply quantify whatever the financial remedy is in the foreign currency? If only it were that simple!The Currency Act, R.S.C., 1985, c. C-52, s. 12, requires that any money referenced in a legal proceeding in Canada must be stated in Canadian currency.  It is on this basis that Canadian courts have generally felt compelled to convert awards for financial loss into Canadian dollars, even if the losses relate to a foreign currency.

There was, for many years, an established rule that the exchange rate be set based on the date of breach or wrongdoing. As summarized by the Manitoba Court of Appeal:

89  At present, the Canadian “breach date rule” is based on a series of Canadian cases which adopted a now obsolete British rule.

91  Those two cases, in turn, relied upon principles enunciated by previous English House of Lords cases.  That principle was that in all cases involving sums payable in a foreign currency, the applicable rate of exchange was the rate in existence on the date of breach.  See, for example, Re United Railways of the Havana and Regla Warehouses, Ltd., [1960] 2 All E.R. 332 (H.L.).[1]

The MBCA went on to describe how some Canadian jurisdictions have moved away from this principle, writing into their statutes specific rules to the contrary. For example, in Ontario, section 121 of the Courts of Justice Act stipulates that a damages award calculated in a foreign currency must be converted to Canadian dollars based on the exchange rate in effect at the judgment date; section 121(3) of that Act provides the court with discretion to use an alternate exchange rate when warranted. Other jurisdictions, even without explicit statutory adjustments, have also departed from this “rule” (as indeed did the MBCA in the case in question).

In this post and the next, I will discuss a variety of situations in which the issue of foreign currency conversion will arise. I will suggest that a simple set of principles can be applied to cut through some of the confusion to arrive at monetary awards that are economically fair and predictable.

Matching the Remedy to the Loss

The basic principle behind an award for damages is to return the injured party to the position he or she would have been in but for the wrongdoing. Let us apply this principle to the question of foreign exchange in each of the five examples listed above.

Turning to our first example listed above, consider that MDI is a US company, and its lost sales were in USD. The exchange rate at the date of breach is irrelevant to MDI; MDI was never going to take the proceeds from the sale and invest them in Canadian dollars. It would have taken the USD from the sale and used them to run its US-based business. It has lost USD.

In order to be made whole, MDI needs to receive an amount of Canadian dollars such that it can take them to the bank today and convert them into $1M USD (the amount of its loss). The relevant exchange rate is therefore the rate in effect on the award date, not on the date of breach.

Thus far, I have argued that the treatment of foreign exchange should be consistent with the principal underlying the financial remedy being awarded. In the next post, I will show how this approach can be applied to other types of cases.